Containers have been the rage. Containers allow developers to package the code, its dependencies, libraries, and more so they can run reliably on different computing environments. Containers are lightweight and portable.

Docker is a popular tool that has become synonymous with containers. Docker can build images and run containers. The tool also allows its users to upload their docker images to Docker Hub – the container image registry from Docker Inc. that helps share images. Docker Hub allows free public repositories for images.

To share docker images, all one needs to do is create a user account in Docker Hub and execute `docker login` with the creds. Voila, now you can keep pushing as many docker images as you want.

During this research, we found more than 1.6 million unique user accounts on Docker Hub. There are more than 6.3 million public repositories at the time of writing this blog.

The Unspoken Treasure Trove of Secrets

When it comes to automated scanning of Docker images, a huge emphasis is placed on vulnerable dependencies, excessive runtime privileges, and more.

Even docker’s very own vulnerability scanner doesn’t scan for secrets. It scans for vulnerable dependencies. While it does secure your docker image, it doesn’t stop the user from copying the AWS credentials config file or any other secrets to the docker image (knowingly or unknowingly).

In simple terms, if you hardcoded credentials into your docker image and push it to your free Docker Hub account, anyone can download the image and look at the credentials.

So we assume that even if an organization uses some tool to scan all their docker images, it might still not detect hardcoded credentials in the docker image and employees might have made those images public.

To test this hypothesis (and see it for ourselves) we planned to search the entire Docker Hub to fetch secrets and other interesting issues (if any).

This idea of scanning secrets in containers is not something new. There has been at least one public attempt to do the same – by Matías Sequeira. His method finds all the recently updated repositories and gets all the tags using Docker Hub APIs. Once that is done, do a docker pull of each tag and search the files using Whispers to detect secrets. He got good results, but his research was limited to recently uploaded images.

We wanted to search across all the public Docker Hub repositories and look for secrets in them.

(We were quite surprised by what we found. If you are interested in the results and not the process to find them, then head over to the top 5 exposure issues we found in the scan.)

After playing with Docker Hub for a while, we found that:

We understood that we can fetch the Dockerfiles for all the repos of an account with the above information. So the first step was to gather as many user/org accounts as possible. We spent a few days brainstorming different ways to get the user accounts – scraping, crawling, heuristics, etc.

Using all our techniques, we were able to gather around 1.6 million accounts.

We created a tool that does the following:

Results from the Massive Docker Scan

A docker image created using a vulnerable base image will remain vulnerable in most cases. It’s primarily due to CVEs in the software packed with the base image.

We found more than 6.3 million unique public repositories in Docker Hub. Analyzing the latest tag in each repository showed that Alpine Linux is the most used base image. It’s lightweight, fast, and comparatively secure, making it the best choice to build your docker image.

A surprising fact is that 6 out of the top 10 base images were built more than a year ago. Any vulnerability that got patched since the build would not have been patched in the original image.

For example, analyzing the most used base image alpine:3.11.6 using Snyk shows that it has 12 vulnerabilities in which two are critical, and five are high.

Okay, let’s get back to how this experiment started – hardcoded secrets in Dockerfiles.

As expected, docker files contained a mind-blowing amount of hardcoded credentials. They included AWS and other cloud environment access keys, private keys, webhooks, and more. The most commonly found secret was the username and password to clone git repositories. 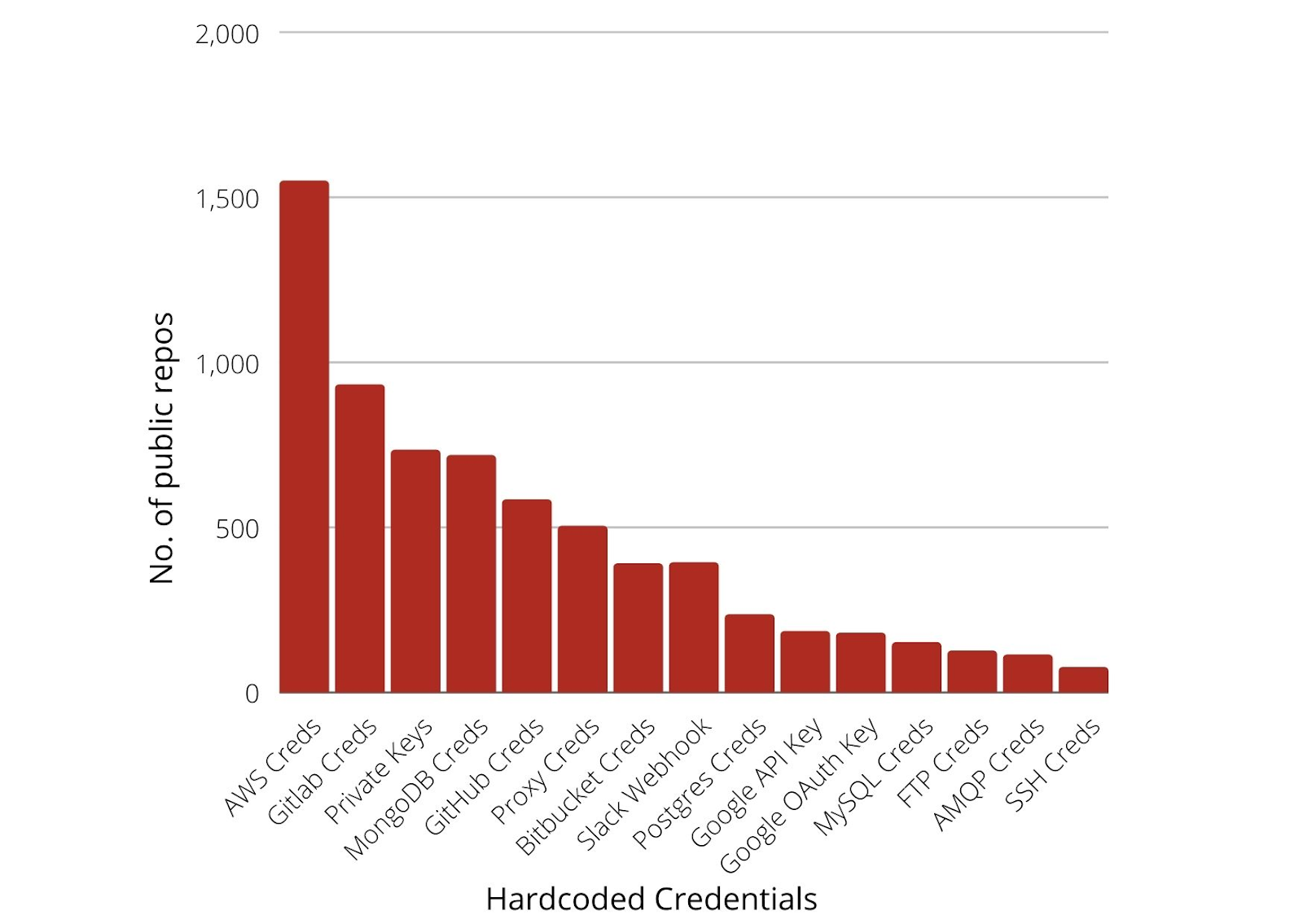 This was not only for public Git platforms like GitHub, Gitlab, etc but also self-hosted instances.

We observed that 46,076 docker images either hardcoding credentials or copying sensitive config files to docker images.

A total of 10,181 repositories were identified to be leaking 15,541 hardcoded secrets. In addition to that, a total of 57,589 potentially sensitive configuration files were copied to Docker IMages across 36,176 repositories.

After going through all the docker images, we found it hard to explain all security issues in a single blog post. Also, there is a whitepaper on critical vulnerabilities in docker images, so we will not talk about them here. Instead, let’s talk about the top five ways your docker images can expose sensitive information.

Hardcoded secrets remain the number one way how docker images expose sensitive information. These secrets are either hardcoded as environment variables (ENV), build arguments (ARG), or even as part of run commands (RUN).

Apart from secrets, the environment variables of some docker images contained all sorts of information (including metadata). Like the runtime environment type (staging/prod), subdomain/domain which the app will serve, internal telemetry endpoints, etc.

The next common way the secrets were hardcoded is in the build arguments ARGs. These build-time arguments will not be available to the docker container; however, the default values (if any) will still be hardcoded to the docker image.

It’s like hardcoding secrets but as files – directly to the docker image. Using Dockerfile alone, one might not be able to guess if a sensitive config file is copied.

However, we found a good number of docker images that copy config files explicitly. Use cases include:

We found a common mistake with creating docker images: copying a private key in one layer and deleting the key in the next layer. One must understand that docker images are a collection of read-only layers. If a sensitive file is added in a docker layer, it can’t be removed in the following intermediate layers. You must remove it in the same layer.

We found 36,176 repositories that explicitly copy a sensitive config file to the docker image using Docker’s ADD / COPY instruction. The most common config files were as follows:

Copying folders to docker images along with git logs is the same as exposing the git repository.

This issue usually occurs when you copy files using ADD/COPY instruction (mostly without a .dockerignore file). We saw the insecure practice of using `COPY . .` or `ADD . .` in Dockerfiles.

Once an attacker gets access to the image, they can find emails of all committers, the source of the repository, code changes, and hardcoded secrets. Even if there’s no git directory where the Dockerfile exists, it might still copy any dotfiles containing configuration/secrets.

In many docker images that we manually analyzed, we found them to contain .git directories or other sensitive dotfiles.

There are multiple repositories where software is activated within the container. The software license is obviously sensitive. Talking about the software installers, some are not even publicly available.

So both the proprietary software and the license to activate it was found in some images.

These are the top 5 exposures in docker images.

Seeing all this, you ask: Enough, but..

How to proactively stop exposures in docker images?

Before we answer that, can you secure and remove exposures in all docker images created within your organization? Not only the images created in your pipelines but also those on your employee laptops.

Few of the docker exposures that we reported via HackerOne were secrets exposed in repositories owned by employees’ personal accounts.

So it’s hard to have an in-house solution that checks for hardcoded credentials in all created docker images and monitor public docker registries like Docker Hub.

If you are concerned about the docker images built within your org’s CI pipelines, then follow these best practices during the build process:

Docker containers are one of the most common technologies used by organizations. They contain quite a good amount of information about the organization’s infrastructures/environments. However, organizations quite often don’t keep a track of their publicly exposed containers and secrets leaking through them. A huge amount of secrets were identified to be leaking out during our research study.

Organizations need to continuously monitor their docker containers (and other asset types) for their potential security risks.

Our Agentless ASM Platform NVADR has been able to identify critical data leaks across their publicly exposed docker containers for many of our customers.

If you would like to check out your organization’s Attack Surface, we offer a Free Scan. Request Free Scan here.

Twitter Facebook-f Linkedin Github Envelope
We use cookies on our website to give you the most relevant experience by remembering your preferences and repeat visits. By clicking “Accept”, you consent to the use of ALL the cookies.
Do not sell my personal information.
Cookie settingsACCEPT
Manage consent

This website uses cookies to improve your experience while you navigate through the website. Out of these, the cookies that are categorized as necessary are stored on your browser as they are essential for the working of basic functionalities of the website. We also use third-party cookies that help us analyze and understand how you use this website. These cookies will be stored in your browser only with your consent. You also have the option to opt-out of these cookies. But opting out of some of these cookies may affect your browsing experience.
Necessary Always Enabled
Necessary cookies are absolutely essential for the website to function properly. This category only includes cookies that ensures basic functionalities and security features of the website. These cookies do not store any personal information.
Non-necessary
Any cookies that may not be particularly necessary for the website to function and is used specifically to collect user personal data via analytics, ads, other embedded contents are termed as non-necessary cookies. It is mandatory to procure user consent prior to running these cookies on your website.
SAVE & ACCEPT

Behind the scenes, we are always generating some awesome CyberSecurity content.

Get notified at the earliest.

We will post our awesome blogs directly to your email.

Are you interested in getting a Free Attack Surface Report for your organization?